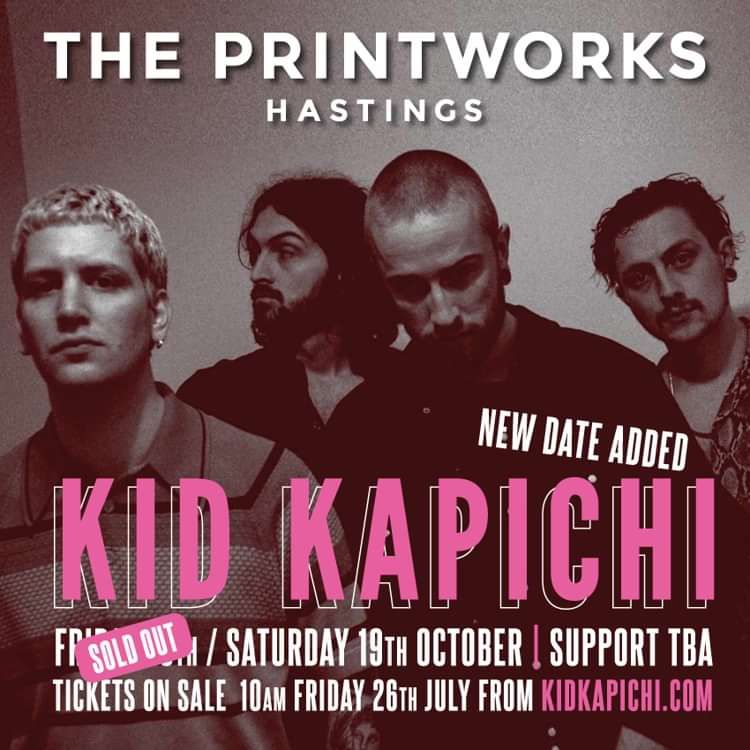 The rock heavyweights from Hastings stamped their name firmly onto the hide of the UK rock scene in 2018, after riding the wave of the release of their single ‘Puppet Strings’ and EP ‘Lucozade Dreams’. When it comes to the sound, Kapichi peddle a unique mixture of explosive riffs, bone-crushing live shows, and ear worming melodies of the duel-lead vocals and guitar.

Renowned for their live ferocious live shows, on stage is where Kid Kapichi really come alive. Fronted by Jack Wilson & Ben Beetham (joint lead guitar/vocals), with the other half of their ear-shattering sound emanating from George Macdonald (drums) & Eddie Lewis (bass). Having shared the stage with the likes of Slaves, Fat White Family, Fizzy Blood and Pretty Vicious; Kid Kapichi’s name is hot on the lips of the UK live music circuit.

In November 2018, Kapichi dropped their single ‘Revolver’ and celebrated with a huge hometown show. Storming into the new year with the aptly titled track, ‘2019’ is a reflection of the current state of social and political affairs, and its impact on a voiceless generation. Already the track has received acclaim as a Next Wave track on Jack Saunders’ Radio 1 indie show, and became John Kennedy’s weekly Big One on Radio X’s Xposure show.