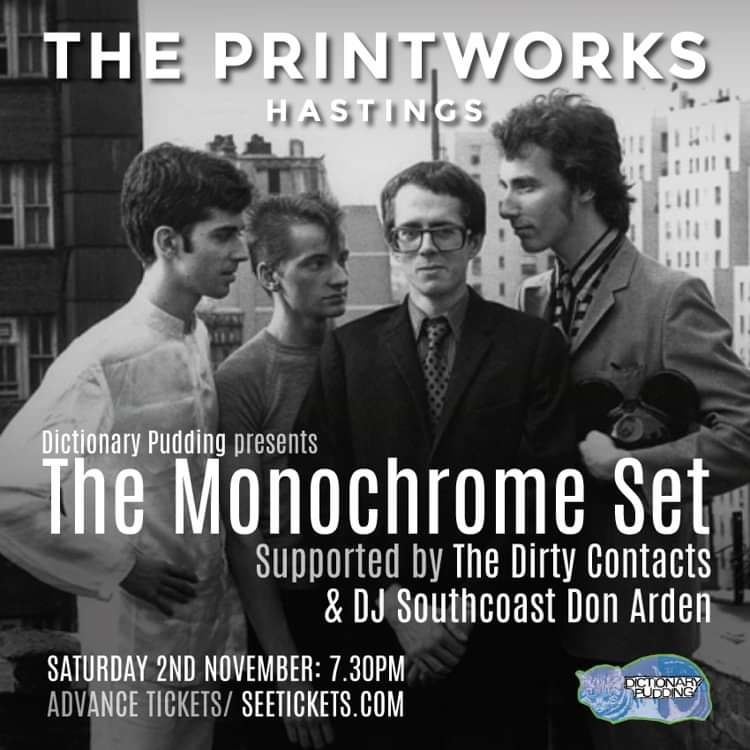 THE MONOCHROME SET @ THE PRINTWORKS HASTINGS

Bid & Lester had been in a band called The B-Sides in 1976, which also included Adam Ant and Andy Warren (who both then formed Adam & The Ants). Andy would go on to record the first Ants album, “Dirk Wears White Sox”, before joining The Monochrome Set in late 1979.

Over the course of 1978, TMS gained a strong following, and Simon Croft replaced Charlie on bass. They recorded a demo, “He’s Frank (Slight Return)”, which was later released in 1980 on Rough Trade. At the end of the year, Jeremy Harrington replaced Croft on bass and vocals.

Experimental filmmaker Tony Potts began collaborating with the band in 1979, designing lighting and stage sets with film projections for their live appearances. The band's early persona was defined by the shadowy, uncertain stage images created by the films to such an extent that he is often described as being the band's "fifth member".

In 1979, they signed to Rough Trade and released three singles, “He’s Frank”, “Eine Symphonie Des Grauens”, and “The Monochrome Set”, all of which charted in the Indie Top Ten, though sales from Indie shops were not eligible for the national charts.

At the end of the year, Andy Warren replaced Harrington on bass and vocals, and the band signed to DinDisc (a subsidiary of Virgin). They released their debut studio album, “Strange Boutique”, produced by Bob Sargeant in 1980. Their follow-up album, “Love Zombies”, was produced by Alvin Clark and the band, later that same year.

They left DinDisc in 1981, and recorded a single for Pre ( a subsidiary of Charisma), “10 Don’t For Honeymooners”, produced by Tim Hart (of Steeleye Span). Later that year, J D Haney left the band to live in the USA, and was replaced by Lexington Crane.

The band signed with Cherry Red in 1982 to record their 3rd album, “Eligible Bachelors”, produced by Tim Hart. Square and Crane left soon afterwards, and were replaced by Carrie Booth (keyboards, flute, vocals) and Morris Windsor (drums, ex The Soft Boys). Nick Wesolowski replaced Windsor for a month, and this line-up recorded a 1982 single, "Cast a Long Shadow", for Cherry Red, before Booth and Windsor were replaced by new lead guitarist James 'Foz' Foster, and Wesolowski who returned to stay.

They recorded their 4th album, “The Lost Weekend” in late 1983, though the release was delayed for over a year, due to complications of the band moving from Cherry Red to Blanco Y Negro (a subsidiary of WEA); the album was finally released in 1985 on the new label.

“Jacob’s Ladder”, the first of two singles taken from the album, garnered the most amount of national radio play for any new single, but, due to the record company’s incompetence, failed to be released in time to take advantage of this media interest. The band released one more single before breaking up in that year.

In early 1990, Bid, Square and Warren reformed the band, with the addition of Orson Presence (keyboards, guitar, vocals) and Mike Urban (drums). They recorded their fifth album, “Dante’s Casino”, for Vinyl Japan, before Urban left, to be replaced by Trevor Reidy (ex Danielle Dax). This album charted in Japan, and, for a time, was the highest placed non-Japanese release there.

Over the next 6 years, the band released four more albums with the same line-up: “Jack” (for Honeymoon Record, later on Cherry Red), “Charade”, “Misère”, and “Trinity Road” (for Cherry Red). The albums all sold as well as their earlier output, but the difficulties in touring and promotion that many bands faced in the 90s took their toll, and the band broke up again in 1998.

Andy Warren became the full time bassist in 2004 for Would-Be-Goods, for whom he and Bid had played on their first two albums. He continues with the band to this day.

“He’s Frank” was covered in 2009 by The Brighton Port Authority (aka. Fatboy Slim), featuring Iggy Pop on vocals. The recording was used on the TV series Heroes and others. This was the most high profile of the many cover versions of the band’s songs by other artists.

In 2010, Bid, Square and Warren reformed the band, with the addition of John Paul Moran (keyboards, vocals also in Blue Orchids) and Jennifer Denitto (drums, from Scarlet's Well). However, Bid suffered a ruptured brain aneurysm in the summer, and plans were put on hold while he recovered.

In 2011, they played dates around the world, and in 2012 Moran left the band for a short time; he would rejoin in 2015. Helena Johansson (violin, mandolin, vocals, from Scarlet’s Well) replaced him, and they recorded their 10th album, “Platinum Coils”, which was released on their own label, Disquo Bleu. This also featured Steve Brummell (drums, ex Luxembourg) alternating on drums with Denitto, who left the band after the recording; Brummell then stayed with the band.

Johansson left the band in 2013, and the band recorded their 11th album, “Super Plastic City”, as a 4-piece.

In 2014, they signed to the German record label Tapete and their 12th studio album, “Spaces Everywhere”, was released in 2015. Square left the band in late 2014, after completing recording of the album, and former member Moran rejoined. Their 13th studio album, “Cosmonaut”, was released by Tapete label in September 2016. Mike Urban rejoined the band in September 2016, replacing Brummell on drums.