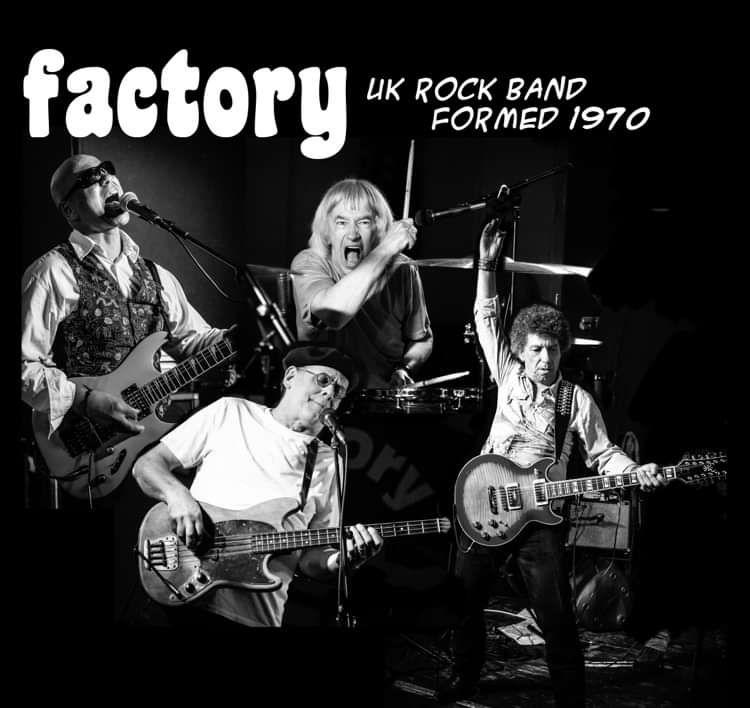 Original rock band Factory was formed in May 1970 from 3 local Hastings area bands, by Laurie Cooksey (drums, vocals), Geoff “Jaffa” Peckham (bass, vocals), Andy Qunta (keyboards, 12-string guitar, vocals) & Tony Qunta (lead guitar, electric violin, vocals). All four are also songwriters. They built a huge following from playing gigs up and down the UK, plus Holland & Germany, often sharing the stage with big names of the day, including Fleetwood Mac, Suzi Quatro & 10cc. Factory was chosen as the test band for Roger Daltrey’s home studio, and recorded several demos with him. The only record they released was a single, Time Machine/Castle On The Hill, which has become a ‘70s rock classic, copies selling for as much as 600 pounds. When Jaffa decided to move on in 1974, his place was taken by Steve Kinch, another Hastings resident. Despite playing 150 shows a year, it was hard to get a record deal in the punk climate, so Factory called it quits at the end of ‘76. The band members each continued in the music business with great success, working with Manfred Mann’s Earth Band, Icehouse, John Farnham (You’re The Voice) & many others. In 2014, the 4 original members re-formed, played some reunion shows, and recorded their first album, Back In The Time Machine, released in 2016. Now they are back with a new album, Aiming High, due for release in the Spring, with contributions from both Jaffa & Steve. The Factory show will be filled with the same energy & excitement as it always was, and the band can’t wait to see you at The Printworks!